A downloadable game for Windows, macOS, and Linux

Repository of this project can be found in: https://github.com/ernesgonzalez33/ProjectCastle

This is a Tactical RPG with only two maps and three difficulty levels. Critics will be well received. It is my first game and programmed using LibGDX and the levels are edited with Tiled.

The art is not mine and the real artists are in the credits. I have no intentions of making money with this game.

Right now I have only the executable JAR version. If somebody wants a .exe or .dmg please ask me and I will create and upload those executables.

There are three difficulties: easy, medium and hard. The heroes’ stats don’t change but the enemies’ stats improve. Also, the enemies numbers vary in the hard difficulty. If this is your first time playing an SRPG, we strongly advise starting with easy.

The main objective of the game is to defeat all enemies in both maps.

In your turn, you have two actions you can do with each one of your characters: move or attack. Every time you touch your character, a menu pops out with these two buttons.

To attack an enemy, you have to be in an adjacent tile, so the normal procedure is to move near the enemy and attack it when you are next to it.

When an attack happens, a red number appears over the attacked unit, that’s the dam- age done. If a black minus (-) appears, the attack missed. The possibilities are 85% to hit.

You only can move once, but if you attack first, then you can’t move again. So think well what you should do. Also, each time you open the menu, you can see the information about your character, and to see the info about the enemies, you can touch them.

If you don’t want to move or attack with a unit, you can leave it in the same spot by clicking the move button in the menu and then click outside of its movement area.

In their turn, the enemies will come close to you and attack, they follow the same rules as you and know the same about you that you know about them. They move thinking about your stats.

Your stats (and enemies’) grow when you attack or defend, feel free to notice the change every time you open the information menu. 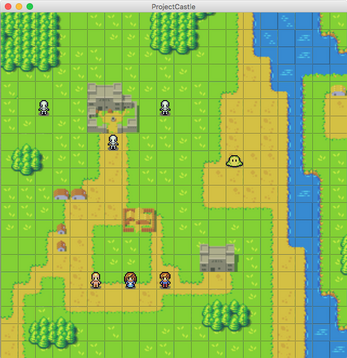 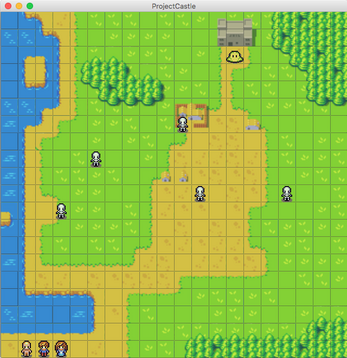